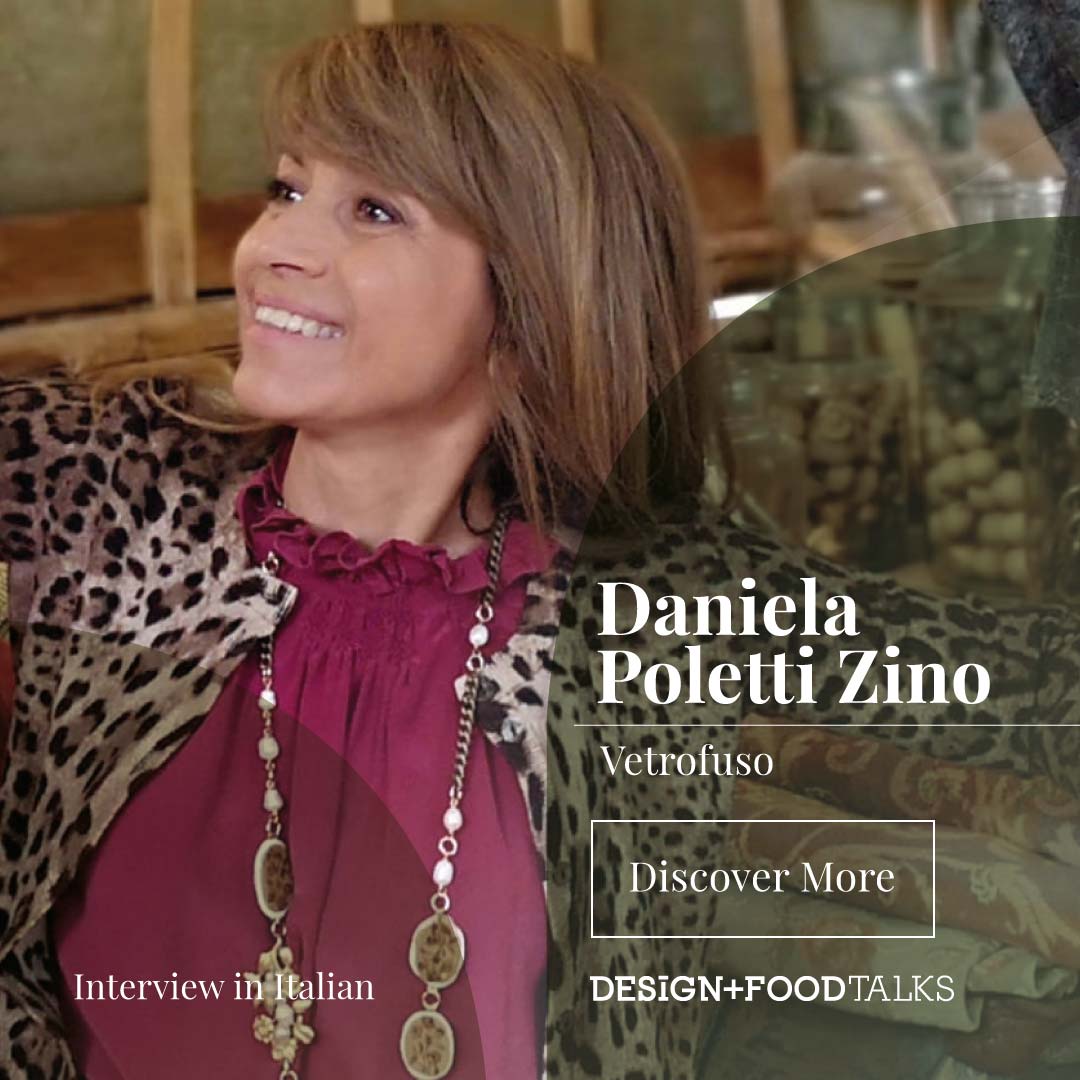 Website: vetrofuso.it
.
Daniela Poletti Zino, born in Piedmont (Northern Italy), has been fascinated by handicraft since she was a child, but she dedicates her early studies to pedagogy.
.
She first lands a steady job as a social assistant in Milan, but chooses to commute everyday for several years to be with her husband and young daughter.
.
Only after her second child is born, she rediscovers her love for arts and crafts: charmed by the sheen and translucency of glass, she finds her vocation and looks for an internship in a workshop in Milan.
.
Through courses about glass fusing, taught by masters from Italy, Germany and the US, she specialises in artisanal craftsmanship techniques.
She’s encouraged on her path by her husband, who gifts her the first of many kiln.
.
She starts experimenting right away, proving her creativity and ingenuity. In the early 90s, in her basement, she melts any kind of glass she can supply, sometimes combining them with bits of metal and oxyde powders from local junkyards, always looking for new textures and combinations.
.
Her first collection, a series of glass flowers and cactuses made using copper scraps from her father-in-law’s workshop is an instant success.
.
It has been a steady growth since then. Just a few months after leaving her employment, she exhibits her first tableware collection at “Salone del Mobile” in Milan. Vetrofuso is founded in 1992 and the journey officialy begins; since 2004 the workshop has moved its location to Cesena (near Bologna).
.
30 years after its foundation, Vetrofuso takes pride in its work, having as customers a range of international high fashion brands and distributors, hotels and restaurants, exporting its brand as well as promoting the ‘Made in Italy’ craftmanship to the whole world.
.
After 20 year long experience in the luxurious showcase of the “Maison & Object” exhibition in Paris (twice a year) and 14 editions in “I Saloni WorldWide” in Moscow, Vetrofuso was present at the first-ever exhibitions of M&O Asia in 2014 and M&O Americas in 2015, further bolstering its presence in the American and Asian markets.
.
A prolific mind, Daniela keeps innovating and devising new creations and decorations. Though she still designs most pieces herself, over the years she has enjoyed collaborations with several other artist and designers such as Serena Confalonieri, Paolo Maria Russo, Andrea Merendi, Manzi Zanotti Designer e Anna de Carlo.
.
In her workshop/showroom in Cesena, Daniela and her skilled assistants are busy everyday doing their best to customize every single piece and satisfy the numerous customers from all over the world.
⁠.
Here is what she prepared for you:
.
BONET
.
Bonet is a traditional dessert from Piemonte in Northern Italy. Mostly associated with the rich cuisine of the wine-producing regions of Langhe and Monferrato (Barolo, Barbera), it’s hard to find anywhere else, but easy to cook at home. This dense and indulgent cousin of Creme Caramel is usually served in the winter months.
.
Ingredients for the Caramel:
.
– 150 g caster sugar ( make more if you need)
.
Ingredients for the Pudding:
.
– 6 eggs
– 150g sugar
– 200g amaretti biscuits (the harder kind)
– 70g cocoa powder (unsweetened)
– 500ml milk
– 30ml coffee (very strong)
– 30ml rum (or strong liquor)
– salt
.
Ingredients for the Topping:
.
50g amaretti biscuits
.
Preparation:
.
Prepare the mould with caramel: in a pan, cover the sugar with water and boil on high flame until golden; then lower the heat until very dark and slightly bitter, then pour in the mold and swirl it around to form an even layer.
Preheat the oven to 200°C. Place a tray filled with water (4 cm deep is enough) big enough to fit your mould.
.
Whisk the eggs with sugar and pinch of salt until very pale and airy. Add in the amaretti (grinded into a fine powder), the cocoa and stir in well.
While stirring. pour in the very hot milk, the coffee and rum. The result should be an homogenous, frothy batter.
.
Pour delicately into the mould and bake for 30-40 min or until cooked through. Test with a toothpick until it comes out clean.
.
Let it set for some hours before unmoulding, or better rest overnight. Top with whole amaretti and more caramel sauce if needed. Serve at room temperature.
It keeps well outside the fridge for up to three days (but it won’t last that long).